In the middle of July 2018 we drove to County Kerry in the southwest, more precisely to the Dingle Peninsula. Where the mainland meets the ocean is where the true beauty of the Dingle Peninsula unfolds. The so-called Last Jewel of South West Ireland ends at the westernmost point of mainland Ireland. Additionally, other highlights in the west of the Dingle Peninsula were also on the agenda for today: a fascinating, deserted archipelago, a special beach and the eponymous capital of the peninsula.

After about 3.5 hours of driving from our home in Clare to the Dingle Peninsula, where everything was in bloom, we arrived at the tiny harbor of Dunquin. It always reminds me a bit of scenes from Game of Thrones. The triangular, pyramid-shaped rock formations in the water just in front of the mainland seem surreal and as if they were put here. Hard to believe that nature can create such shapes. It’s not for nothing that they serve as a popular photo scene together with the distinctive path to Dunquin Pier. In the distance we were able to see the silhouette of a large group of islands. The Blasket Islands are Ireland’s westernmost islands, protruding from the wild Atlantic Ocean 5 kilometers offshore.

A small ferry boat took us and a few other day trippers across to the largest of the islands within 20 minutes. The crossing alone was an experience itself, because the Atlantic Ocean is rarely calm even in summer and so we sailed joyously over the waves. The fresh breeze felt really good in these summery temperatures! From the boat we were able to take a look at the famous island of Skellig Michael from afar. Since the ferry boat can neither dock at Dunquin Harbor nor at Great Blasket Island, we switched from a smaller inflatable boat to the ferry boat and vice versa every time. It felt like a true little adventure.

The 6 kilometer long and 1.2 kilometer wide Great Blasket Island is the most visited island in the archipelago. We now had 3.5 hours to explore the island. You will find mainly abandoned settlements of the former islanders, who decided against the hard, burdensome life here at the latest in 1953 and moved to the mainland. Nevertheless, there are supposed to be one or two hard-boiled who spend most of the year here.

A free tour guide took us through the ruined, former village and told us a lot about life here at that time. It was characterized by hard work, renunciation and making do with the bare minimum. People lived according to the rules of nature, more precisely according to the rules of the Atlantic storms and floods, which sometimes made it impossible for months to cross over to the mainland in simple boats to get necessities. Walking through the ruins, where up to 176 people once lived, you can imagine how lonely and hard life must have been here.

For an impression of what it was like living on the Blasket Islands in the year 1938, click here.

You can also meet and watch a lot of animals here, e.g. sheep, donkeys and sea birds, including puffins. Of course there were no puffins when we were on the island. So far we just haven’t had the luck to see these special birds in person. But we were lucky that there were lots of seals around the island. A few even washed up on the beautiful, white sandy beach of Great Blasket Island, the Trá Bán. However, you couldn’t  get too close to them, because then they would immediately disappear. We later found out that Ireland’s largest colony of grey seals is actually at home here.

Hier lang lieber nicht | Rather not here to

Our time on the island flew by. We really enjoyed the seclusion, tranquility and originality of this deserted island. The westernmost café in Europe provides catering if you haven’t thought of your packed lunch. There are even 5 recently renovated cottages you can stay overnight in. With prices starting at €130 per night and person, it’s not exactly cheap, but it certainly feels adventurous to live almost alone on an abandoned island.

Café am Rande Europas | Café on the edge of Europe

Was für ein herrlicher Ausblick! | What a view!

Back on the mainland, we once again enjoyed the unique view of the Great Blasket Islands from Dunquin Harbour, we could hardly tear ourselves away from.

Wieder zurück auf dem Festland | Back on the mainland again

Mein Lieblingsbild dieses Trips | My favourite photo of the trip

We followed Slea Head Drive, a scenic, extraordinarily beautiful circular route along Dingle’s west coast, counter-clockwise from Dunquin Pier. After just a 5 minute drive we arrived at our next destination – Coumeenoole Beach. The picturesque bay invites you to swim at low tide and in hot summer weather and has even served as a movie set. From above, the water looked really beautifully turquoise blue that day and magically attracted us. Having previously been in the water on Great Blasket Island, we took a quick walk down the cliff steps to dip our feet in the clear, cold water and get a taste of the atmosphere down here.

Just next to this really beautiful beach is a significant place called Dunmore Head. It is the westernmost point of mainland Ireland and thus mainland Europe. In other words, nowhere else in Europe are you as close to the American continent as here.

En route to our final destination for the day, we stopped again at the official viewpoint of the Blasket Islands called Blasket’s View, Irish: Radharc Na Blascaodaí.

Another stopover was at the extensive Fionn Tra Bay Beach in Ventry, where Falk let stones hop over the water once again.

The beating Heart of the Peninsula

The Dingle Peninsula has its center in the charming town of Dingle, that we reached in the evening. For a long time it was an attraction for alternative people and artists of all kinds. It also gained worldwide fame through the 37-year resident dolphin Fungie, who could be admired here daily on boat tours until October 2020. We also had the honor of meeting him (see this blog post). A bronze statue commemorates Dingle’s favorite resident, who is missed by all of us.

This charming, colorful little town that’s lined with its harbour, is full of pubs, restaurants, small shops and pubs that double as shops. At the latest in this place, every vacationer succumbs to the charm of the island. Even if Dingle’s streets are often overrun with tourists in summer, the artistic port town exudes a very special appeal every year.

So we strolled through the colorful streets and alleys of Dingle, looking for particularly beautiful photo scenes, but also looking for a suitable gastropub for our well-deserved dinner. The previous trips on this long summer day had left us starving. We finally found what we were looking for in Danno’s Bar & Restaurant, a quaint gastropub with a welcoming atmosphere near Dingle Harbour.

Just before sunset we headed back home. Many more summer road trips with our numerous guests were to follow. 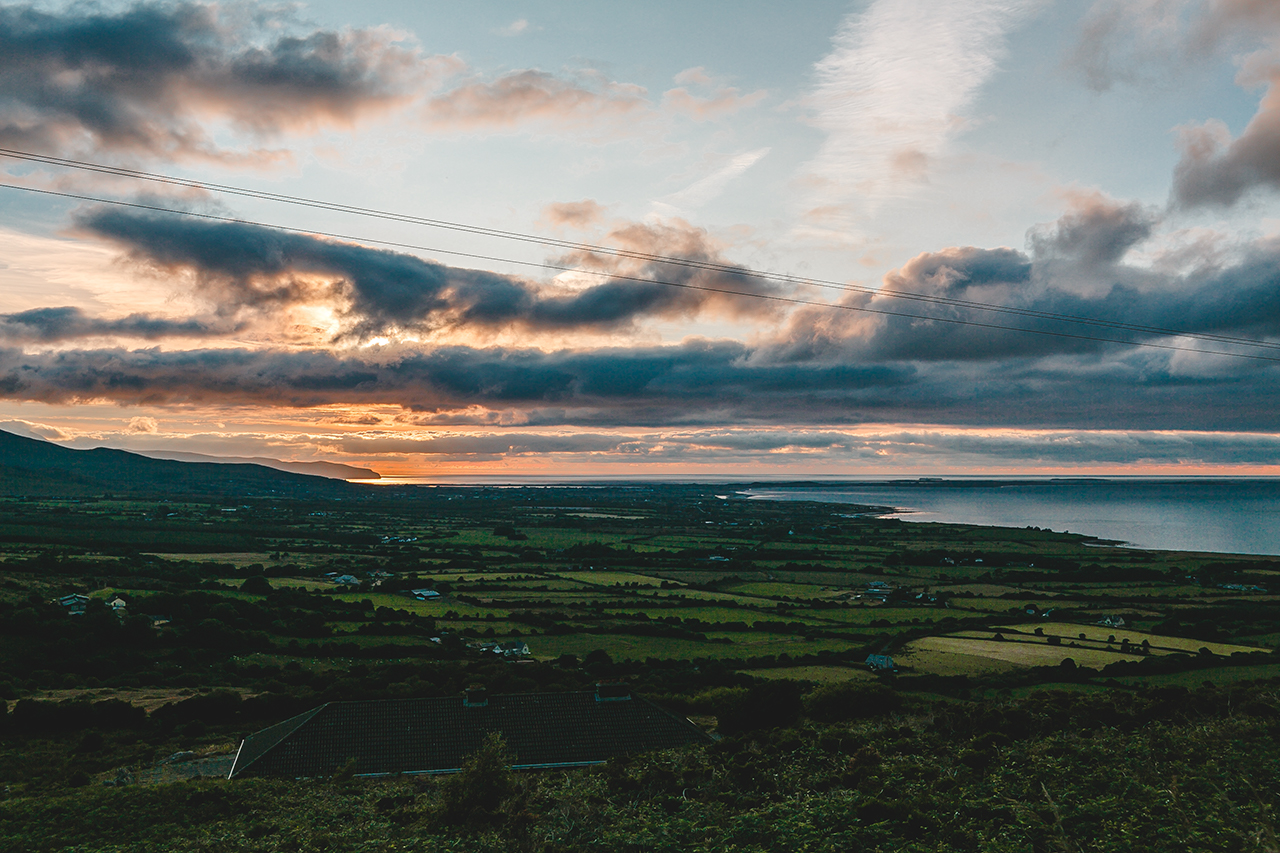