This is actually an Ireland blog, but since we were on vacation in Scotland to explore the Highlands recently and since something truly magical happened there, we don’t want to withhold it from anyone. As some of you may have noticed on Instagram, we’re both pretty big Outlander fans. That’s why our trip to Scotland was largely about exploring the various filming locations of the series. There will certainly be a detailed separate article about this at some point. But today we would like to tell you about the highlight of our trip.

It’s 9/29/2021. A day of exploring the Scottish Highlands, including Culloden and the Highland Folk Museum, is drawing to a close. Our stay in Scotland has almost come to an end. In the early evening we arrive at the last destination of the day. We drive many kilometers in our rental car along a very narrow, winding road through a lush green, hilly landscape. We’re the only ones far and wide – luckily no oncoming traffic! Why are we doing this to ourselves again? Oh yeah, I researched long and intense to find the main location for Outlander. Those who know the series or books certainly know what is meant. We’re talking about the Craigh na Dun stone circle. Except that this stone circle doesn’t actually exist. In fact, on a hill in the middle of a farmland called Kinloch Rannoch, painted Styrofoam stones, modeled after other Scottish stone circles, were set up for the shoot. Of course they weren’t there at the time of our visit anymore, but the hill was still there. 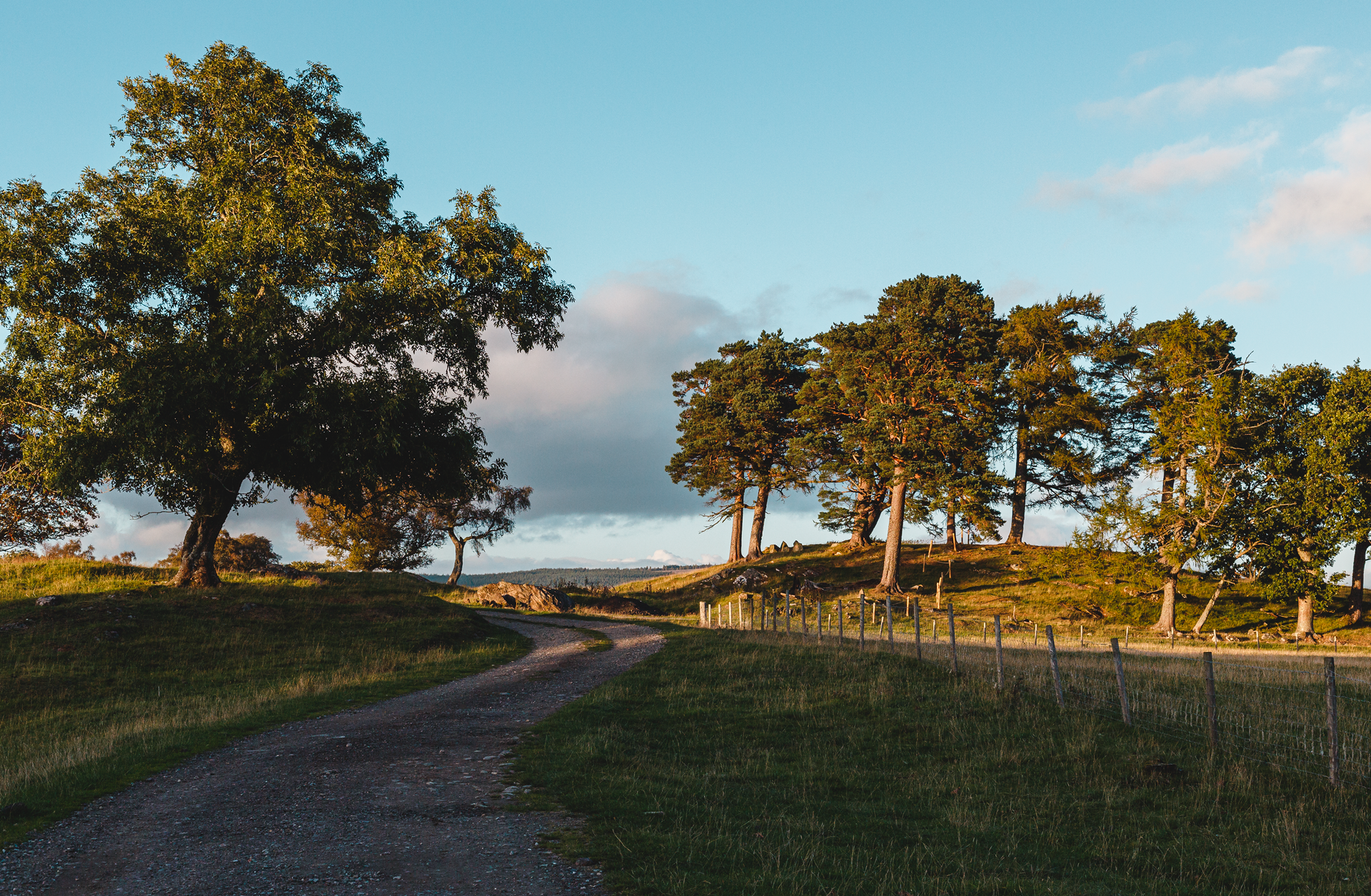 As soon as we got closer to our destination, I recognized it from afar. Yes, we are right here, it was filmed here! It looks exactly like in the series, only without the stone circle! If you take a closer look, there are actual stones on the hill, but these are much smaller and not arranged in a circle. We quickly grabbed the cameras and let’s go! Although this is private land, the owners are geared towards Outlander fans. A sign shows us the way to “Craigh na Dun”.
A cold, rustling wind whistled around our ears. The sun was low and bathed the surrounding land in a golden light. From the hill you can look into a valley with a large lake. It glittered in the light of the slowly setting sun. A mountain landscape can be seen in the background. It was drizzling very lightly, so that you didn’t get wet, but it was enough for a double rainbow that didn’t leave us for the entire stay. Can it be any more romantic? If you can’t imagine how breathtakingly beautiful this place is based on this description, you should take a look at the photos below (even if they can’t really capture the real beauty).

Moved by the indescribable grace of nature at this moment, we both were flabbergasted. We were not only blown away optically, I was also able to perceive a very special energy. I don’t think many people are receptive to it, but I could clearly feel that this place is very special. Have you never been to a place that gives you goose bumps, but in a good way? I can remember, that many years ago I felt this way at Stone Henge in England. And it’s no secret that stone circles like the Stone Henge aren’t built in places, where different energy meridians run, for nothing. It felt just as magical here. As it turned out, I’m not the only one who felt that way. Outlander producer Maril Davis also describes the filming of the fictional Craigh na Dun as particularly magical, almost spooky. Every time they filmed the season 1 scene in which Claire picks the flowers on the portal stone, the wind freshened as if by magic. “It was just kind of spooky and magical and felt like we were in the right place at the right time. It was just like a special moment.” It was exactly the same with us! There is just something about the place that you cannot see or describe, but only feel.

Was für ein riesiger Regenbogen! | What a huge rainbow!

We both tried to capture this special piece of earth from different angles on photo and video again and again. I was so fascinated by the view and the double rainbow that I forgot everything around me and didn’t even notice what was going on behind my back – or did I just not want to notice? My heart was suddenly beating up to my chest. Upon repeated request of Falk, who had recently disappeared “to go to the toilet”, I pulled myself away from the camera and turned to face him. He held my free hand and suddenly got on his knees. In the midst of countless heaps of sheep droppings, he must have found an immaculate spot. An incredibly beautiful ring, that couldn’t have been more perfect, sparkled at me from a square box. A huge, pale pink princess-cut stone and 6 glittering brilliants, connected by a delicate rose-gold band, shone towards me. I immediately burst into tears and answered “yes” to his question before he even finished it. I threw my arms around his neck, crying with joy, while the camera happened to be filming everything (and in retrospect you have to say: luckily). Shortly afterwards, both of us couldn’t remember what we’d said in the first place!

Falk assured me again and again that it wasn’t actually planned yet, only in a few days for my 30th birthday, but it’s soooo beautiful here. It was as if nature or the universe had yelled at him, “Do it! Now or never! There won’t be a better moment!” Falk probably had no choice but to reschedule spontaneously. And I’m not mad with him for that at all. On the contrary – it was just perfect and beautiful. So emotional and romantic. Dear Falk, you did everything completely right. When you get so many signs, listen to them. Of course, tears flowed from both of us, we held each other in disbelief over and over again and wanted this moment to last forever. Despite the freezing cold, we stayed here for about an hour. We just couldn’t break away. It was simply too good to be true!

Der schönste Ring, den ich mir hätte vorstellen können | The most beautiful ring I could have ever imagined

Afterwards we drove – as luck would have it – to the hotel in the village of Falkland, where the Inverness scenes from the beginning of the 1st Outlander season were filmed. We checked into the B&B where Frank and Claire had spent their honeymoon, which is actually called “The Covenanter Hotel”. Yes, we even stayed in the same room, where Claire combs her hair while Jamie’s ghost watches her from the fountain until Frank speaks to him and he disappears. At dinner we toasted to our engagement for the first time and made plans about when, where and how we would tell our family and closest friends. At first it remained our secret. We ended the evening merrily in a pub around the corner with a live music session. In our Outlander room, we watched the video of the proposal again before going to bed so that we could better remember our words and what happened. Again we both had tears of happiness in our eyes and our hearts beat faster. That day was just perfect.

The engagement ring also contributed to this. Falk had designed it together with a Berlin jewelry designer collective called InJewels , according to my taste. More than 1.5 years earlier, we had happened to come across this shop by chance and had a spontaneous conversation with the incredibly pleasant designer and owner Ama Stella.

As Falk explained to me later, the rose-pink stone is a morganite, which is also called pink beryl. In addition to more famous beryls, such as aquamarine (blue beryl) or emerald (green beryl), morganite is rather unknown. Perhaps this is also due to the fact that it occurs very rarely and was only discovered in 1910.
The morganite, which is also called “angel stone”, is said to bring luck especially to the zodiac sign Libra, Aquarius and Taurus. How good that we are both Libras! It’s also said to relieve feelings of stress and help the nervous system to find peace and balance. In view of the stressful wedding preparations that are still waiting for us, that certainly can’t hurt! It’s also said to have the ability to bring out and maintain feelings of love. Not least because of its colour, the morganite is associated with love and romance and is therefore ideal for a marriage proposal.
Together with the 6 brilliant-cut diamonds that frame the raised solitaire stone on the delicate, rose-gold ring, the result is the number 7 – a famous lucky number. In any case Falk couldn’t have met my taste better. I would never have expected a ring like this, which even after months blows my mind when I look at it.

Although it is unique, the ring can be purchased from InJewels in a slightly modified version. I named it “Craigh na Dun” – how could it be any other way?

If you are also toying with the idea of ​​proposing to your significant other soon, this post could hopefully inspire you. We would be happy to put you in contact with the jewelry designers, should you also be interested in advice. We can warmly recommend working with InJewels 100%. And no, this is not a sponsored ad. 😉

You have binge-watched the previous Outlander seasons as if there was no tomorrow and you want to visit this and other filming locations? We are happy to help you with the planning. Just leave us a comment or write us an email!

P.S. That was not the complete story, in reality there is a whole lot more to it – e.g. mysterious letters, I have received from Falk since landing in Scotland, my 30th birthday, on which the engagement was originally planned, including a mean feint from Falk, and much more. But we’ll tell this story another time …

Willst du mich heiraten? | Will you marry me?