Because Falk likes to hike, he was surprised with a trip to the Killarney National Park by me (Verena). We already drove through Ireland’s beautiful, green and oldest National Park and hiked to the Torc Waterfall during our road trip in 2016. We also liked the idyllic town of the same name, which is located directly by the National Park. So nothing stood in the way of a repetition. This time, however, other corners of the national park were on the plan – with 10,000 hectares, it’s not difficult to discover something new.
Spoiler in advance: Unfortunately, planning and Ireland don’t seem to fit together very well.

We started right after breakfast for the only 2.5 hour drive to Killarney. The first thing on the plan was to get a map for the National Park at the Tourist Office. Unfortunately, it was closed for some reason, so we just had to go hiking at a venture. So we walked along the signs to our next destination – the Ross Castle, where I had something special planned. On the way there we noticed that everything was under water – it must have been raining a lot lately, but that didn’t seem to be anything unusual for Ireland, we thought.

One kilometer before reaching the finish an extremely large and deep puddle suddenly blocked our way. It wasn’t possible to get through – even on the left and right side of it in the boggy forest – without getting wet to the bone. So we had to walk all the way back and take another route to the castle, which was considerably longer than the usual one (of course). Nobody could warn us before, because the tourist information was closed!

On the way to Ross Castle, we met the last indigenous red deer herd of Ireland (Cervus elaphus), whose ancestors lived here since the Neolithic Age – and not just once! We were able to spot them next to us in the forest or even in front of us on the trail again and again. They seemed to surround us unobtrusively everywhere.

When we finally arrived at the Castle, it was so late that my surprise – a boat trip on the adjacent Lough Leane (one of the three lakes in Killarney National Park) – literally fell into the water. The last day’s tour was still supposed to take place in the afternoon, but unfortunately you can’t rely on such times, especially in the off-season. The tour was probably canceled due to the mediocre weather and the lack of rush. Another point of my plan that didn’t work …

As we sulkily ate our sandwiches, we pondered what we could do instead. It occurred to us that nearby so-called Jaunting Cars were waiting to chauffeur those tourists through the park, who couldn’t walk anymore because of blisters on their feet or out of sheer laziness. So we decided to take the way back to our car by such a horse-drawn carriage. We even managed to slightly bargain the price down and the driver told us a lot about the park, the city and the surrounding mountains – that was really interesting and is only to be recommended! Time just flew and after 10 to 15 minutes we reached our starting point again.

We then drove to a mystical monastery ruin by car, which is located at another end of the Killarney National Park. Arriving at the Muckross Abbey, it drizzled slightly, but the sun cast a magical light on the scenery and made everything look almost surreal. As always, we tried to capture it in the pictures, but one hundred percent is simply not possible. We can only emphasize it again and again: you must have seen it for yourself.

Der Baum im Innenhof der Abbey, den man niemals ganz aufs Bild bekommt | The tree in the patio of the abbey that you can never fully get on a picture

The Muckross Abbey is one of the best maintained ruins we’ve ever seen in Ireland – and that means something, because we’ve seen a lot of them! Here you can even climb the old, narrow stone steps, feel a bit like sleeping beauty on the way to her spindle and enjoy the view of the surrounding green landscape and the old, rustic cemetery from above. In the courtyard of the former monastery a large, thick tree has been growing for many, many years – so high that you never get it on a picture completely. Simply a beautiful scenery and a real insider tip (still), which shouldn’t be missed on your visit to the Killarney National Park! Have we mentioned that it’s completely free?

Then we went to our Bed and Breakfast being located very close to the outskirts of the city, where we got a home-cooked dinner by the hostess. On the way there we were surprised by a beautiful rainbow. Since we finished up the evening with a movie in the cinema on our first visit to Killarney two years ago, we continued the tradition this time.

The next day we weren’t that lucky with the weather. It rained all day, was cold, windy and murky. Therefore we couldn’t visit our planned excursion destinations. So we slowly went homeward with a detour to Dingle. Arriving on the Dingle Peninsula, first we drove to the giant Inch Beach, where it was storming and pouring heavily. So the leisurely beach walk has come to nothing. It was good enough for one or two photos, though: 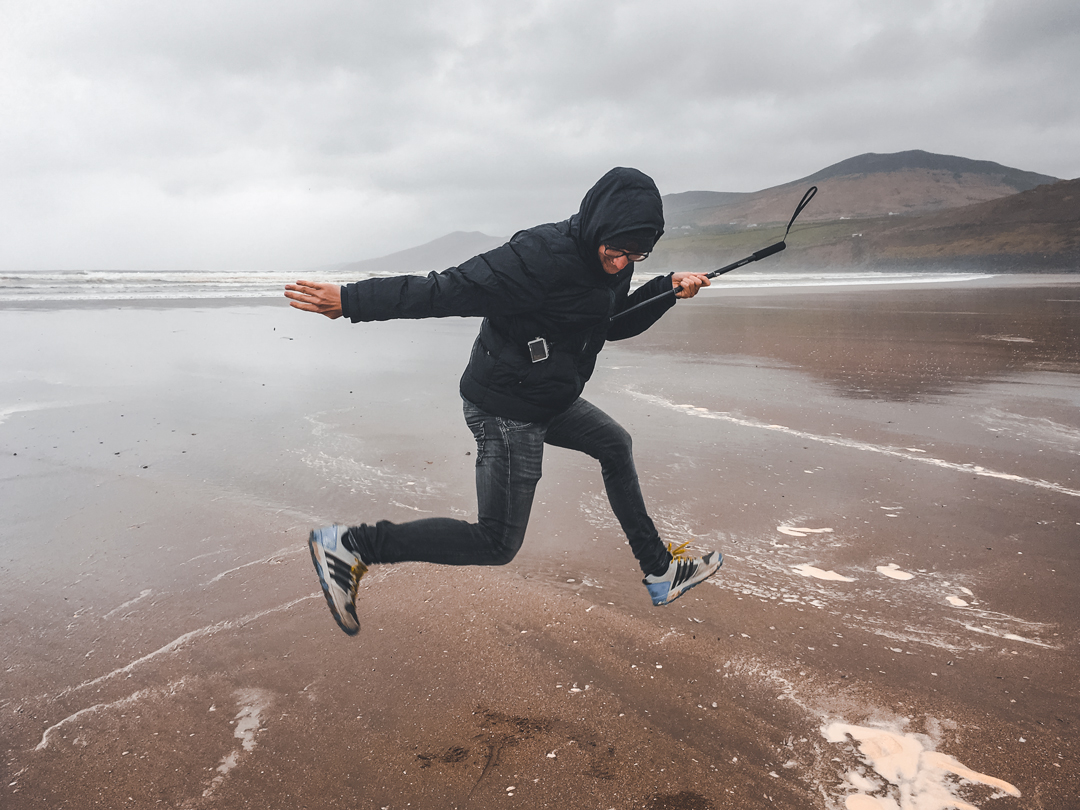 Afterwards, we drove along the Connor Pass – Ireland’s highest passable road – which gets so narrow sometimes that only one car fits through it. However, the clouds were so deep and it was so hazy that we were granted no view here. Well, what should I say? This is Ireland – one day it’s sunny and mild and the next day it’s raining and grey. We’ll have to get used to that …;)

Here’s a 10-point-checklist of what to do in Killarney National Park and the surrounding area:

Have fun ticking off, Verena & Falk!