People travelling to Ireland often only visit the coastal regions. The heartland of the country, also called the Midlands, is almost only being entered for travelling through. This is understandable on the one hand, because the Irish coast is breathtakingly beautiful and spectacular, but on the other hand the Irish Midlands also have a lot to offer – even though they have much less tourist activity and infrastructure. But that can also be an advantage, especially in the peak travel period, when Ireland’s coastal regions are overrun by tourists for the most part. Then it’s still nice and quiet and deserted in the heartland. We also took advantage of this occurance to quietly explore part of the Irish Midlands.
But which counties belong to the Midlands? According to travel guides those are Leitrim, Roscommon, Longford, Westmeath, Offaly and Laois (pronounced “Leesch”). Quite a lot!

The lost Land of Saints and Scholars

We also read in the travel guide that the Irish Midlands offer idyllic landscapes, proud mansions, archaeological treasures and sleepy places, whose inhabitants are very happy about vacationers. All this and the prospect of the lack of tourist buses or souvenir shops tempted us.
The probably most famous attraction in the Irish Midlands is Clonmacnoise in Co. Offaly – supposedly Ireland’s oldest and most beautiful monastery site. This was the first thing on our plan. On the way there, we stopped briefly at a beautiful lake in the Burren, the barren limestone area in Northern Clare – you remember? Falk took out his drone and flew a few rounds. 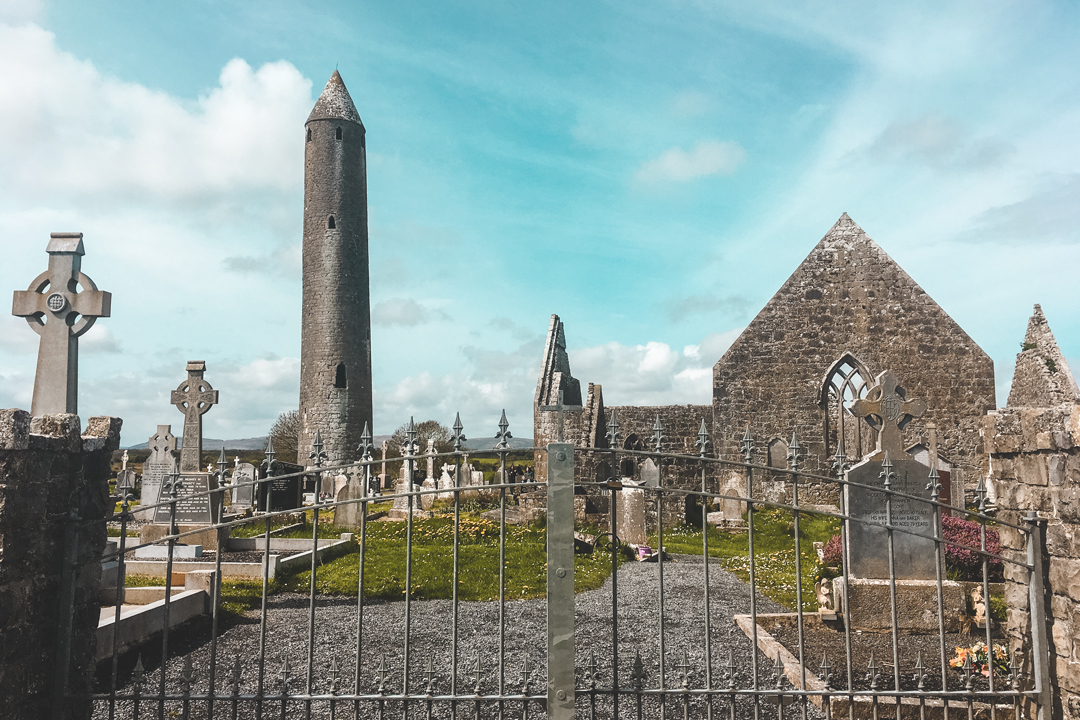 On the way to Clonmacnoise we passed old ruins, round towers and rustic cemeteries again and again. Lush green hills flew past us as the sun shone and made the colors seem even brighter.
Once arriving there, we first visited the museum and its audiovisual presentation. We learned that once upon a time the most important crossroads of the country, through which the river Shannon and the “Road of Kings” (Esker Riada) run, was here. Saint Ciarán must have found the location in the heart of Ireland so favorable that he founded a monastery here in 548 AD, that later became a bastion of Irish faith, literature and art. So monks from all over Europe came here to study and pray. It’s due to them that Ireland got the name of the “Land of Saints and Scholars”.
Slowly forfeiting after the 12th century, the site was finally destroyed in 1552 by English troops. But what remained of it or could be copied, can be seen until today! Several surprisingly well preserved early churches, high crosses, round towers and ancient tombs line the walled monastic settlement overlooking the Shannon.

I was particularly fascinated by the legendary stories about St. Ciarán, the founder of Clonmacnoise. Already in his young years he was rumoured to have done many miracles, which already showed that he had to be holy.
One of these stories related directly to the founding of Clonmacnoise. After successfully completing his theological studies with the prominent St. Finnian of Clonard, the spiritual father of the “Twelve Apostles of Ireland,” he moved on to one of the Aran Islands in County Galway, where he spent 7 years with another great saint of that time. St. Enda of Inishmore taught and eventually trained him to become a priest. Legend has it, that Ciarán one day had the vision of a large, wondrous tree that grew so high and wide originated from the center of Ireland that it protected the entire “Emerald Isle”. His teacher St. Enda realized, the miracle tree symbolized Ciarán himself. He was supposed to bless all Ireland with his holiness and grace and to become a mentor to many. And so St. Ciarán is said to have set out to found his own monastery in the center of Ireland.
Already 7 months after the foundation he died, probably due to the plague. But the first monastery building he built, or what remains of it, can still be admired today.

The 7 Wonders of Fore

The next points on our plan promised to be no less miraculous. After another hour of going up country and a little refreshment in the provincial town of Mullingar, we finally reached the Fore Valley, where the “7 wonders of Fore” are supposed to have happened. The monastery founded in 630 AD by St. Fechin outside the village of Fore or the buildings later built on it, are said to be associated with these “seven wonders”. We tried to find some of them despite the sudden start of rain …

1. The holy Fechin is said to have carried the 2.5-ton stone lintel of St. Fechin’s Church to its present position solely by the power of his thoughts and prayers.

2.  A hermit is said to have struck a cell in a small rock near the church and to have lived in it.

3. Nearby, there’s a wellspring – the St. Fechin’s Well – giving water that is said to never cook. Cynics shouldn’t verify this claim though, because the family of the one who tries falls victim to eternal damnation.

4. There’s also a tree right by the spring that supposedly never burns. The coins pressed into it and the scraps of cloth hung on it are merely the expression of a modern superstition.

5. Right next to it are the remains of a mill without a ditch.

6. Another wonder is the uphill running water, which is said to have being moved up towards the mill by Saint Fechin himself by hitting his bishop’s crook against a stone in a distance of 1.5km.

7. The Benedictine abbey with the name Fore Abbey, also called “Monastery of the Quaking Scraw”, was miraculously built on the former bog land in the 13th century.

We have to admit, these so-called wonders are difficult to verify and more likely due to the superstition of the Irish 😉 But let’s agree that this atmospheric valley is worth a trip with or without miracles.
After exploring six of the “seven Wonders of Fore” we hit the road for the long way home. A beautiful sunset, that we were able to catch at the lake in the Burren, was the conclusion of our first day trip to the Irish Midlands. More trips to the heart of Ireland were supposed to follow. To be continued…